Home › 2013 › Religions and NGOs must unite to eradicate poverty

Religions and NGOs must unite to eradicate poverty

Last night I saw a fascinating article/clipping, it was posted on a social media site and was probably featured in a local newspaper print run. It spoke to me about optimism and reminded me of a comment made by Ravi Singh of Khalsa Aid when I interviewed him after the London riots in 2010. During that summer many had assembled outside Gurdwaras and Sikhs were also seen guarding mosques in an effort to ensure the safety of people and buildings as the threat of mass violence and destruction apparently not driven on frustration drew closer by the hour. I think we all know the real reason for the riots. I suggest it was down to a combination of lack of urban renewal and dysfunctional austerity. We need to ask ourselves:

Has any real progress been made since 2010 to avoid a repeat of public frustration?

Ravi was on a show and we also spoke about the amazing work that Khalsa Aid are doing in Haiti. I suggested that if people come together on a common humanitarian cause, they forget their differences and unite on shared values, for example, solutions and a resultant service. Ravi suggested greater community cohesion could be achieved through outreach programmes, for example, a Gurdwara (Sikh Temple) setting up and sponsoring a neighbouring housing estate football team.

For approximately 3 years I was chair of the Interfaith Youth Trust. Just before I joined them I attended a meeting at the House of Lords where youth based interfaith work was being discussed. Alongside the patrons a Sikh lady spoke about a Scottish interfaith group event she had organised – an outward bound forest activity. Kids from different backgrounds and religions were brought together working on various mini-projects during their trip. At the end of the event the kids were asked to draw on their experiences and design a set of leaflets that communicated common values. The result was that each child was seen to take more interest in their own faith, for example, wanting to know more about its core values. It also developed a sense of unity amongst them. Basically, we’re all the same and are bound by good and belief in God if you choose to.

The article, see below, outlines how two religious groups (Sikh and Christian Baptist) recently united to help the homeless. I’ve seen some of the outstanding work of Sikh Welfare & Awareness Team (SWAT) and their continued commitment to actually ‘talk the talk and walk the walk’. Daily they tend to streets and help those sleeping rough. Some of the sleepers are unemployed, others have complex issues, for example, drug addiction and alcoholism. Yet SWAT rather than the politicians have taken ownership. I remember trying to start a Facebook mob campaign to get people to write on politicians walls, to ask for action. Sadly, the call fell on deaf ears as people seemed to me happy about sharing their lifestyle statuses rather than lifting even a digital finger to help others. 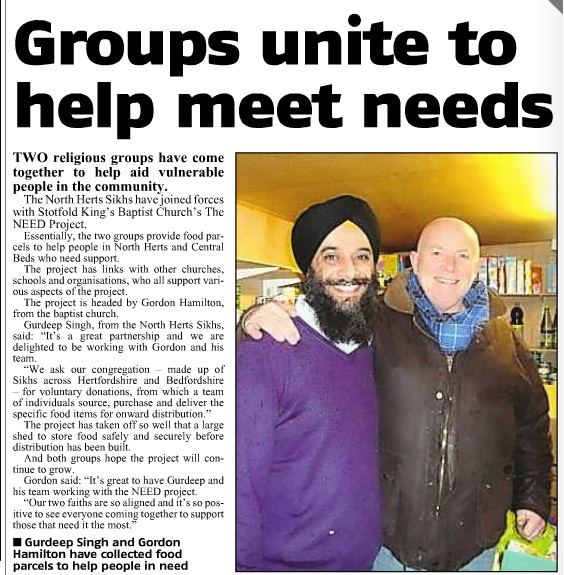 We should not be afraid to take ownership of an issue that is affecting us. We also shouldn’t leave it to politicians who will simply juggle balls & spin themselves out of any guilt. We need to be stronger as a global community to fight for what is right. No one should have to die of starvation when 30-50% of the world’s produce does not reach human stomachs because of poor marketing, packaging, waste and storage. Poor media that focuses on celebrity and sensationalism does not help. For example, Haiti is still suffering but where is it in the news? Today, people like Khalsa Aid are still sending in people to help out in the Orphanages. Thank God that there is people out there who have the desire to aid through self-less service.

When will we wake up and help each other whether you are a humanist or someone of faith?
Creative community leaders together with Church and Temple leaders can help, especially if the funds that drive them come from our votes and pockets !