I suggest you visit http://www.bbc.co.uk/sport/live/commonwealth-games/28228974
Year after year, tournament after tournament the BBC are obsessed with the performance of British athletes. The medal table says it all:

I’ve always had issues with the word ‘commonwealth’ yet the BBC Sports coverage seems to have missed the point.
Would it not be inspiring to feature more stories and coverage of how other countries are developing, especially with poor resources.
For example:

Did you know that India achieved 5th position in the medals table?
Do we have any knowledge of the bronze winner from Women’s boxing, Indian? 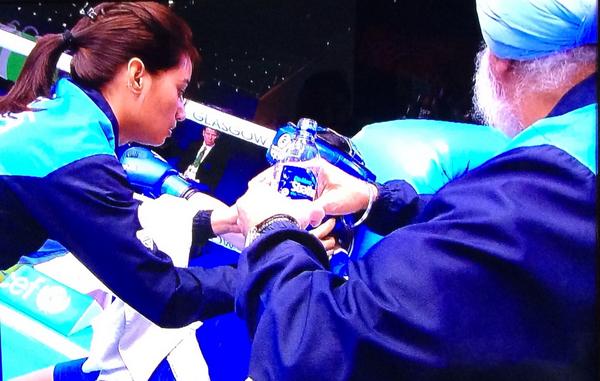 Rani from India just before her final boxing round at the Commonwealth Games 2014 – She lost by a split decision – I believe she was the clear winner.

Sports stars & spectators traveled far and wide to see the games, why can’t the BBC reflect their interests?
If the commonwealth suggests a happy family, then an under current of imperialism also needs to be downplayed.

Sadly, no lessons have been learnt since an article I wrote back in December 2010:
https://saviarora.com/2010/12/21/bbc-poor-sports-reporting-and-lost-charter/

The UK is multi-cultural, a landscape that continues to evolve. Therefore, it is natural for those who have traveled from the commonwealth whether it be in the 50s or in more recent times to have an attachment to the land of their fathers.

Yes, we wave the flag with many are interested in fair play and equal opportunities.
Unfortunately our media masters have other thoughts!