Here is an article from KQED Radio concerning a recent episode at LA airport.

When her championship high school debate team navigated airport security, Jennie Savage’s students and their trophy got through just fine. Except one.

The related audio from the news site/archive can be found here.

Having recently (28th August) returned from a lengthy trip to the US and Canada on every occasion I was put aside to have my turban pressed down as part of the TSA’s search process. I was singled out every time and the TSA staff were, for myself courteous, explaining why they were conducting the ‘search’.

The TSA have worked with the Sikh Coalition. Their (The Sikh Coalition’s) excellent work has resulted in the following guide: Airport Screening Procedures for Sikh Travelers.

Back to the Trip…
From San Francisco to Seattle, because I was wearing a Ben Sherman Tee with cassette tape images, the security guard said, ‘Do they still have tapes in Saudi’! I said I wasn’t from there. Actually if you read the T-Shirt it had British flags depicting the era of Mods back in the 60s! See design below: 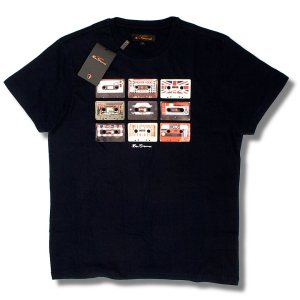 I was wearing this one!

It was only on a flight from Seattle to Washington Dulles, from memory, that someone wiped down my turban with a cotton swab.

At Washington Dulles on my way back to London I was getting a bit annoyed about being singled out yet again and said, ‘look I’m a UK born guy that is just returning home’. The TSA chap replied, ‘I was born in Colorado and if I wore a hat then I would have to have it searched’. Clearly he was unaware that Turbans are NOT hats!

Being singled out and being kept in a Penn is not a nice experience.
There is clearly more learning that is required about who Sikhs are.
Profiling is being incorrectly performed and could be ignorance based, remember, the potential shoe bomber was a white person.

This is why I keep harking on about the need for more media about Sikhs, who we are, what are our ethics and the rich history / heritage we have.

NB The Sikh Coalition have helped to pass the California Kirpan Education Bill, it passed 36-0 in the full Senate vote.